You can get Free Halloween Pages and Samples from our Halloween Coloring Pages section. 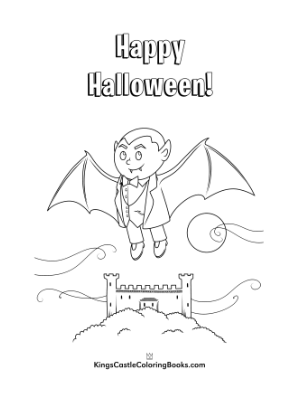 Dracula Jr. darts about the midnight sky above his father's castle in
Transilvania!

Brahm Stoker invented the gothic legend of Dracula over 100 years ago,
but he didn't invent the legend of the vampire by any means.
Tales of vampires have been around for thousands of years.
But in these modern times, the name Dracula is practically
interchangeable with the word “vampire”.

You'll find lots more fun pictures like this in our Halloween Coloring Book! 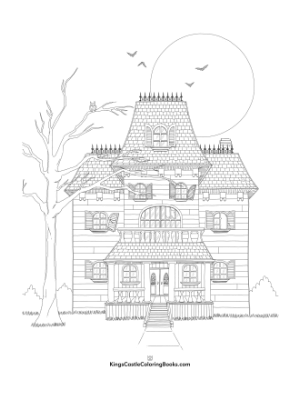 Uh oh - your car has broken down on a dark, lonely road on a stormy night!

Do you take your chances in this creaky old house or just wait in the car?
Maybe the ghosts are friendly!

Houses aren't the only things that can be haunted by spirits who refuse
to enter the afterlife.  Ships, hospitals, military barracks, even entire forests
have been known to host spectres of the night.

Feel free to add your own spooky spectres to this picture
featured on the first page of our Halloween Coloring Book!

The Halloween Coloring Book includes games and activities like these word puzzles
surrounded by fun Halloween characters to color! 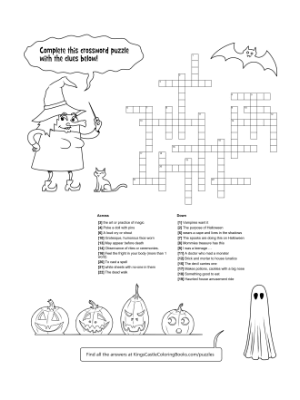 You can download this Free Sample while you wait for
your Halloween coloring book!

The answers to this crossword (and all of our other puzzles)
can be found in our PUZZLES section - no peeking! 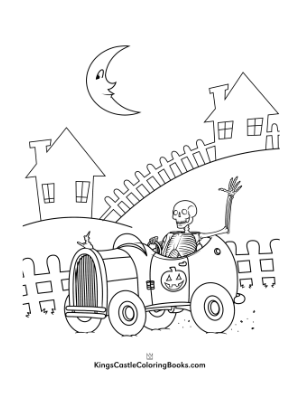 A friendly skeleton goes for a joy-ride!

Going my way, pal?
Expect the unexpected!  It's all part of Halloween fun!
Would you take a ride with a driver who doesn't even have any eyeballs?

You'll get your chance to decide when you get our fun Halloween Coloring Book! 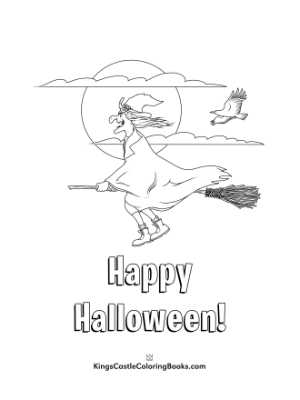 The Old Witch Flies Through The Air!

Here's another page you'll find in our Halloween Coloring Book
whether you choose the Paperback or Printable Download option! 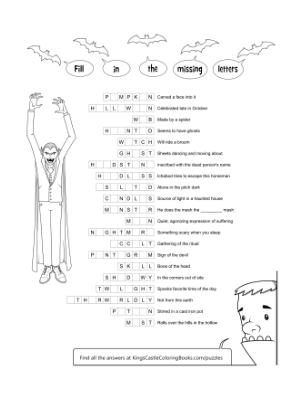 Here's another fun puzzle page from our Halloween Coloring Book!

This one features wacky bats, the immortal Dracula, and
Franky the big, lovable lug!

Enjoy this Free Sample while we finish drawing all the pictures for
the new book!

The answers to these mystery words (and all of our other puzzles)
can be found in our PUZZLES section - no peeking!

We hope you enjoy our
Spoopy halloween coloring book!

You can also get more Free Samples from our Halloween Coloring Pages section!

is halloween a holiday?

Unfortunately, for all of us who would love to have the day off from school or work on Halloween, the answer is no.

In fact, at the federal level, it's considered a celebration.

The definitions for both are as follows:

Holiday :  1870, Congress designated the first four official holidays. This gave workers in the District of Columbia paid time off. Congress creates these holidays according to the United States Code. On these days, every year, all non-essential government offices close for business.

Celebration :  To perform a sacrament or solemn ceremony publicly with appropriate rites. To honor an occasion, especially by solemn ceremonies or by refraining from ordinary business.

These two definitions can not be interchanged.  They are very different indeed.
Halloween is a celebration and officials have not moved to make it a federal holiday.

Despite it not being declared federally, October 31 is celebrated by most Americans.
Many claim it's their favorite celebration.  Dressing up in a fantasy role for a few hours
definitely has an appeal and wearing the costume to work can be really fun.
For most kids, a whole day that celebrates eating sugar sounds like a great idea.

The traditional costumes of the celebration are usually “creepy”or “spooky” -  ghosts, skeletons,
witches, vampires, diabolical pumpkins and other strange entities.
In fact, any supernatural creature does the trick - no pun intended!

...of ghosts and hauntings!

Ghosts are as much a part of Halloween as candy corn, but these mysterious entities hold a special fascination
for most people year round!

Ghost stories are as old as time itself.  While many ghost stories are intended as fiction, the ones that really
stir the imagination are the notorious “true accounts”that permeate our folklore.
These true ghost stories are impossible to substantiate - which just makes them more enthralling after all!
Is there really a ghost?  Or have those who make ghostly claims lost their grip on reality -
or a weird combination of those two possibilities?

Ghosts are known by many names, such as spirit, specter, phantom, wraith, apparition or poltergeist.
Intrinsic to human culture since the beginning of time, the existence of ghosts, whether real or imagined,
seems a foregone conclusion of people in every corner of the world.

A ghost is most commonly believed to be the very essence of a deceased person,
visiting or, in some cases, refusing to leave our world.
In western culture, this is colloquially known as a haunting.
The word haunt literally means to remain  or persist.
Hauntings are not usually random.  On the contrary, the location of a haunting is most often tied to
a significant event or emotional bond the ghost experienced when alive.
In some cases, a haunting may be a ghost's quest to exact revenge upon the living for mistreatment
or murder!

The belief in such restless spirits aligns with a chaotic view of the world and is therefore more often associated
with superstition, the occult, and mysticism than with deity-centric religions.

Ghosts generally come in three varieties: the unseen, the apparition, and the manifestation.

The Unseen
“Things that go bump in the night”- an age old phrase that characterizes the unseen ghost.
Unusual sounds, or the rummaging of things in another room are disconcerting but usually harmless
ghostly occurrences.  But there are tales of uncanny sensations - when the presence of another person
accompanies such bustling and banging.
Objects are moved about.  Most often, these moved objects are noticed after the fact,
but on occasion, things are actually seen to float through the air or slide across shelves, tables, floors, etc.
as if some invisible being is carrying, tossing, or pushing these things around.

The Apparition
Amorphous shapes, weird lights, and baffling undescribable visions are the hallmarks of the apparition.
Often encountered in combination with the exploits of the unseen, the apparition could be any number of weird
phenomena, but they are very often recognized as ghosts by witnesses.

The Manifestation
The most unsettling of all is the very manifestation of a person as they appeared when alive, wandering hallways,
walking through closed doors, or tapping the shoulder of unnerved house-sitters.
The manifestation is usually described as translucent, as if the result of some ethereal projection.
Sometimes they speak to the witness, offering anything from sympathetic reassurances to dire warnings
to threats of retribution!

what about bedsheet ghosts?

For decades, the simplest Halloween costume has been the white bedsheet with a pair of eye holes.
Instant ghost.
Most likely, the bedsheet became the de facto ghost get-up because of its similarity to a burial shroud,
most often a sheet of white linen or silk.
The idea that a spectre might wander among the living under such a shroud
struck folks as pretty spooky, and any handy bedsheet would surely create a similar image.
Today the bedsheet ghost is as iconic as Dracula or Frankenstein!

A cartoon ghost can appear as any of the above categories, with one major exception.
These ghosts are not directly associated with a particular deceased person.
They come from a realm not often specified.
They are often depicted darting around old haunted houses just because it looks cool.
Cartoon ghosts don't have tragic back stories or previous tormented lives on earth.
They are fun cartoon characters that happen to have weird, magical power - like a ghost!
Not often the subject of lore, cartoon ghosts are very popular for their sheer aesthetic.
That's why we put 'em in our Halloween coloring books!

No traditional witch is complete without her crooked old broom imbued with the unlikely power of flight!

The origin of the magical flying broom is not fully understood.
It's thought that it may have come from pagan ritual dances meant to invoke healthy crops,
often performed with brooms or rakes.

The uncanny witch is an expert in the occult and has different ways of getting her broomstick aloft.
Some witches soak their brooms in a cauldron of remarkable secret ingredients.
In other cases, a rare ointment is slathered and massaged into the wood.
Moreover, the well practiced witch can speak strange incantations, causing inanimate objects to act alive and move about.
All she has to do is hold on and the broom will abide by her commands!

A witch's broom may also be akin to a magic wand or conjuring staff.
Trees are said to have mysterious powers unknown to common folk.
A witch or warlock can harness these powers by wielding so much as a small twig.
Often, a large branch is chosen for stronger magic - a broomstick, for example.
Brooms of old were simple, long branches tied up with twigs and fronds.
A highly skilled witch would have no trouble launching such a "magic wand" through the air as she pleased.