Magnificent and mysterious beasts of the ancient realm!
The word dinosaur means 'Terrible Lizard'.  Though paleontologists no longer think of them as over-grown, frightening reptiles, Dinosaurs refuse to surrender their legendary status as prehistoric monsters!

Did you know there's more to DinoKids than just coloring books?

Get some fun shirts for the kids!

At CuteForKids.net, you can get the DinoKids printed on T-shirts for kids and little babies too!

A dinosaur coloring book for kids of all ages!

Yes, you've heard the old  'kids of all ages' line before - but we really mean it!
You don't have to be in diapers to appreciate these funny characters who's only wish is for some vibrant colors.
We ask you, who can resist these charming, cherubic prehistoric animals?

Just look at their little faces!

Dinosaurs have been depicted as cute and lovable for a long time, but this trend took a while to catch on. There was a time when the average child didn't even know what a Dinosaur was. As science became more popular with average citizens, Dinosaurs became famous.
The thing about Dinosaurs: most of them were BIG! Museum displays were epic. Dinosaurs were seen as primordial monstrosities - and kids thought they were just dandy. The bigger, the more frightening, the better.
Artists were happy to oblige, conjuring a nightmarish world of drooling, red-eyed dragons - but eventually, the art community would make Dinosaurs fun and silly too.
Folks of all ages agreed, cute Dinosaurs are also dandy!
100 years later, cute dinosaurs are just as popular as their monstrous inspirations.

Back on the subject of Terrible Lizards, some of the scientists who pioneered great expeditions in search of dinosaurs were not so pleasant themselves.
Most infamously...

Othniel Charles Marsh, born 1831 in New York, was a simple farm boy interested in science.
His rich uncle helped him get into Phillips Academy. From there, he went on to Yale.
He traveled to Germany for more education, where he met a fellow whose name would forever follow his in the History of Natural Science.

Edward Drinker Cope was born in Pennsylvania, 1840.
Nine years Marsh's junior, young Cope was on a parallel course with Marsh in the study of Natural Science, thanks to his own parents fostering his ambitions.
In 1863, young Cope went to Germany for more studies, where he met his elder, O.C. Marsh.

When they got back to America, both pursued paleontology with passion.
Paleontology is the study of fossils, the remains of creatures long gone, baby!

They got together often, sharing each other's studies and discoveries for years.
Young Cope found an ancient amphibian in 1867. He named it Ptyonius  marshii.
Old Marsh discovered a marine reptile specimen the following year. He named it Mosasaurus copeanus.

We interrupt this tale of friendship turned to turmoil
in order to bring you this surprising special offer!

and now back to our story!

One day in 1874, after scouting a quarry together, Marsh found out young Cope made arrangements with the quarry master to keep all fossil discoveries for himself.

Old Marsh had his own connections and founded his own quarries, determined to get the better of young Cope one day.

He got his chance in 1868, when young Cope built (and published) a reconstruction of Elasmosaurus platyurus,
Old Marsh denounced it. Further, he got their mutual mentor's confirmation that it was wrong.
Young Cope mounted the animal's head on the end of its tail!
A most epic blunder - and a terrific embarrassment for Young Cope.

It should be no surprise that, by this time, Marsh and Cope were not on friendly terms - forget about working together!
Old Marsh employed spies to help him stay one step ahead of sneaky young Cope, using the code name“Jones”when discussing him.
Both men became preoccupied with the sabotage, swindle and slander of each other's tireless expeditions across America for prehistoric animals.

Battle of the behemoths

In 1877, young Cope bought The American Naturalist Journal and by 1880, he published over 70 papers on fascinating primordial creatures.  He kept himself busy and avoided Old Marsh for several years.

In 1882, Old Marsh's contributions to the fossil record earned him the title: Chief Paleontologist of the U.S. Geological Survey.  He used his influence to stifle Cope's access to federal funding and publishing opportunities.

Young Cope was quite the industrialist and continued his work, until 1885, when he fell on hard times over a failed mining operation.

In 1890, old Marsh tried to confiscate Cope's library of fossil specimens on behalf of the U.S. Government.
Young Cope proved most of his collection was acquired through his own financing, thus not federal property.

Fed up with old Marsh, Cope gave a freelance journalist the skinny on Marsh's history of misconduct.

A rousing article made headlines in The New York Herald, which resulted in a Congressional investigation of the U.S. Geological Survey over gross negligence.

The G.S. paleontology department was dismantled.  Old Marsh was out of a job, the subject of scandal, and had to give most of his fossil library to the Smithsonian Institute.

the rest is history...

Young Cope sold most of his collection to the American Museum of Natural History not long before he died in 1897.

Old Marsh lost most of his federally funded collection to the Smithsonian.
What remained in his name, he gave to the Peabody Museum of Natural History when he died in 1899.

Was there a victor in the famous feud between old man Marsh and young Eddy Cope?
Surely we are to let bygones be bygones.

While young Cope may have had the last laugh on old Marsh, it is Marsh who found more famous dinosaurs.

Funny that old Marsh's most famous dinosaur, Brontosaurus was later proven to be a skeleton of Apatosaurs - with the skull of young Cope's Camarasaurus!
Another blunder - or deliberate hoax?
The world may never know...

Can you find the big Dinosaur names
in the letter jumbles? 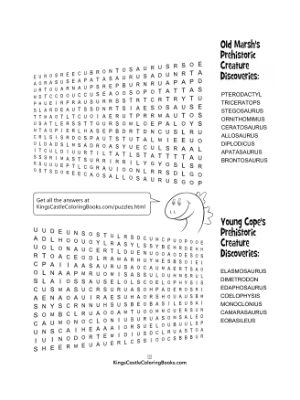 This fun word search puzzle is not in the dinosaur coloring book.
It's a real challenge!  It features all the crazy dinosaur names listed below.
Can you find them all?

The Fossil Record is a fancy way of saying "the bones we've found".
There are a lot of bones out there.
Many strange animals have come and gone, but Dinosaurs are the most famous!

Dinosaurs are a big gang of monsters from the past!

They showed up on Earth a long time ago, in an age called the Triassic period.
Nobody understands where they came from, but they were the big bosses for over 200 million years!

Many Dinosaurs left their bones for us to find. If not for fossilisation, we would never have known about them.
For many years, scientists thought dinosaurs were great big lizards,
but it turns out that many dinosaurs have more in common with birds!
Of course, many scientists believe birds evolved from lizard in the first place. So it gets kind of confusing!

The "bird connection" has been very popular over the past 20 years, but saying "dinosaurs were great big birds"
is to oversimplify the matter.  Lots of dinosaur skeletons suggest no connection to any bird we're familiar with!

These days, scientists say there are avian dinosaurs and non-avian dinosaurs.
The word dinosaur means "big scary lizard".  Whatever they were - they were fascinating creatures.

Ancient skeletons; animals unlike those ever seen alive in our world.

learn even more about dinosaurs!