CuteForKids!
pictures of animals to color!

Pictures of Animals to color

Free Pictures of animals to color 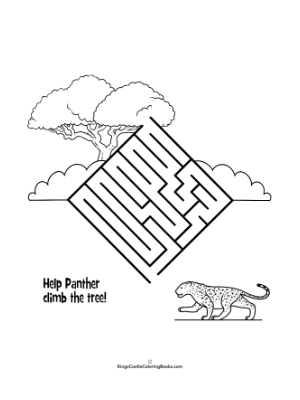 Feel like coloring pictures of animals for absolutely zero money?

We can help with that too!

Here's a Free Sample!
The CuteForKids Animal Coloring Book is full of fun pictures like this!

Scroll down for another Free Picture to Color!

Big Cats take center stage in this book of animals to color!

The Free Page above features everybody's favorite feline, the Panther.

Technically speaking, all cats are Panthers.
But most times, the word Panther refers to Leopards, Jaguars or Pumas.
The Puma is also known as Mountain Lion, Cougar and North American Panther.
Panthers are generally considered "jungle-cats" but the North American variety wouldn't know a jungle from a jungle-gym!

Aside from The Pink Panther, most folks have heard of the luxurious Black Panther - which is a black Leopard or Jaguar.
If you get next to a Black Panther, you can even see the spots!

The Cheetah is a spotted cat, but it's not a Panther - and is never black.
Cheetahs are unique also because they don't have cat-feet.  Cheetahs cannot climb trees because they have 'dog-paws'.
In fact, a Cheetah is like a big Grey Hound Dog with the head and tail of a cat!

Lions and Tigers are the biggest cats around - but one is not simply a striped version of the other.
Lions are the only social cat. There's no such thing as a Pride of Tigers, or a Pride of Panthers.
A Lion without a Pride is a lost soul.
Every other Big Cat we know about wants to be left alone, dag-nabbit!

Keep scrolling for another Free Download from the CuteForKids Animal Coloring Book.

There's more to CuteForKids than just this Animal Coloring Book! 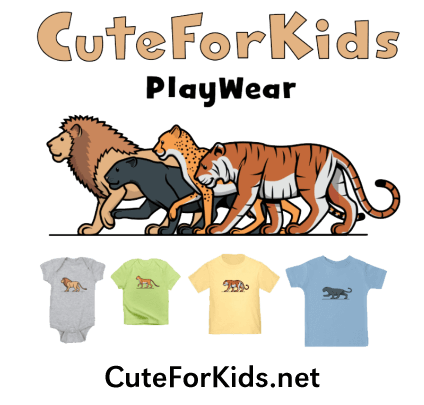 CuteForKids.net is part of the King's realm.
From there, you can get play-wear for youngsters featuring the CuteForKids Animals! 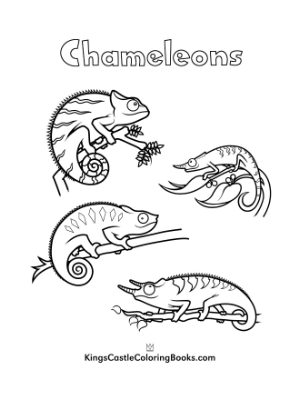 What's a petting-zoo without some radical reptiles?

Is there any person alive that doesn't marvel at Chameleons?

chameleons are fun animals to color!

Chameleons change color in real life - so anything goes!

Chameleons have googly eyes!
They never look at just one thing at a time - unless they are aiming for dinner, which they strike with their whip-like, sticky tongues!

They have four wonderful mitten-like feet, perfect for climbing in small branches, where they prefer to spend most of their days.

When a Chameleon needs a helping hand, it's curly tail serves just that purpose!

Some Chameleons have horns on their head and face!

If you want fun pictures of animals to color, Chameleons are tops!

Scroll down for more Free Pictures!

Denizens of the deep! 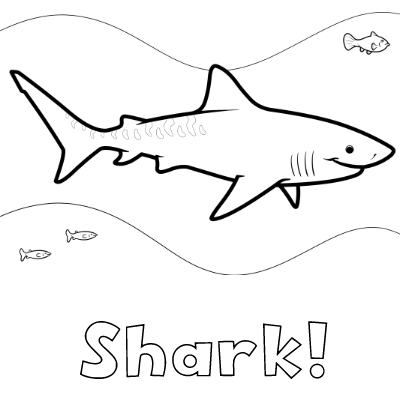 Sharks are 100% scary.  At least Big Cats and Reptiles look like they're smiling sometimes!
Real Sharks never smile, but CuteForKids Sharks are positively friendly looking!
That's the power of illustration for you!

There are four sharks to color in the CuteForKids Coloring Book!

Sharks can be fun to color, especially if you use your imagination!

Generally, Sharks are not very flamboyant.
Gray, white and a little black here and there will do the job - and if that's your jam, go for it.
But trust us, these Shark kids won't mind the psychedelic treatment!

Scientists say Sharks have been swimming in the oceans of our world for millions upon millions of years.

Their most unusual feature is their skeleton, made almost entirely of cartilage.
Sharks have two bones. An upper jaw and a lower jaw... and you know about those jaws!
Sharks are famous for trying to eat everybody in the sea!

Most fish have a sort of dumb look in their eye, but Sharks are always sizing you up, it seems. 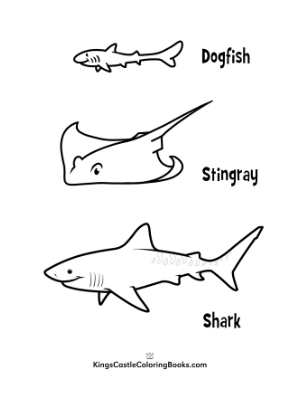 Sharks come in many forms, not all of them notorious killers.
Ever heard of a Dog Fish?  It's a little Shark!

Here's a Free Printable Download picture of animals to color!

Continue scrolling for more Free Pictures of animals to color!

Do you recognize these animals?

Certainly you've heard of Wooly Mammoth, the furry elephant with tremendous tusks!
Good ol' Wooly was among the very last of the fury elephants.
Mummified remains of Wooly Mammoth have orange-brown hair, but scientists think this may be misleading.
You can color your Wooly Mammoth any way you choose - it might be exactly right for all anyone knows!

The Saber-Toothed Cat is another prehistoric animal most folks know and love.
It's real name is Smilodon, which means "saber-tooth".  So either way you say it is fine.

Megatherium is a creature you may not be so familiar with.  Its name means "great big beast" and scientists say it was a kind of giant Sloth.  Modern Sloths are small enough to be carried around by zoo-keepers.
They spend their natural lives in trees and eat leaves.
But Megatherium may have weighed up to 3,000 pounds and probably ate trees, branches and all!

The tank-like Glyptodon has features like the modern Armadillo - but at a terrific scale!
Glyptodon may not have been very aggressive, but it had a huge mass of spikey bone on the end of its tail.
All the better to keep the peace!

These four prehistoric animals are in the CuteForKids Book of animals to color. 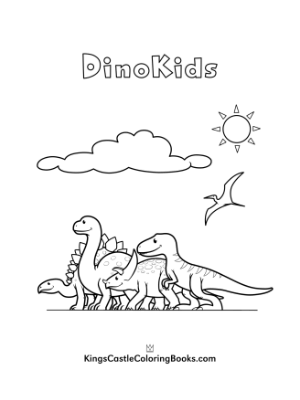 DinoKids are a happy bunch of Dinosaurs - and this is a Free Coloring Page!

The CuteForKids Coloring Book is full of fun pictures of animals waiting for you and your family to color them with crayons, markers, or pencils! 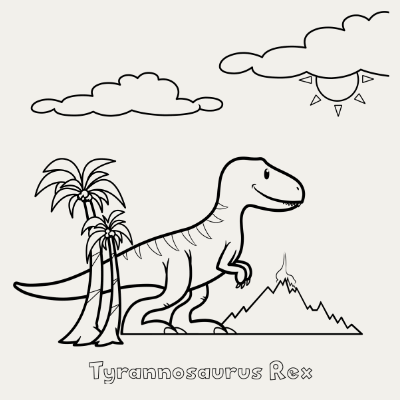 King of the Dinosaurs - Junior!

Tyrannosaurus Rex is a name we all know.

This cute little Dinosaur is stomping about alongside a smoking volcano!
What a tough-guy!
You or somebody you love could be coloring this picture - if you only had the CuteForKids  Coloring Activity Book! 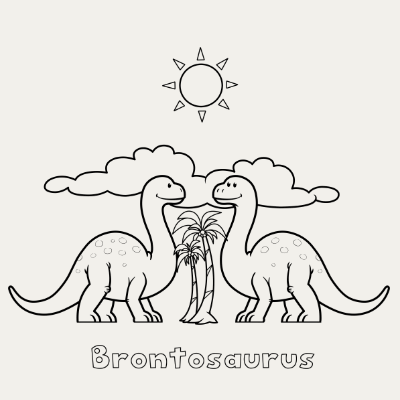 It's late in the day and the Brontosaurus Brothers are about to eat some trees.
Just a little snack.

Are they different colors or the same?  It's up to you! 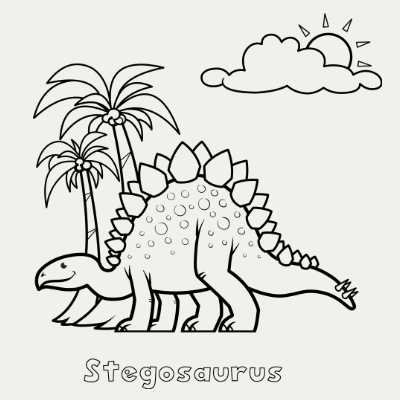 We don't really know why it was such a fancy animal.
But Stegosaurus sure makes for a fun picture to color! 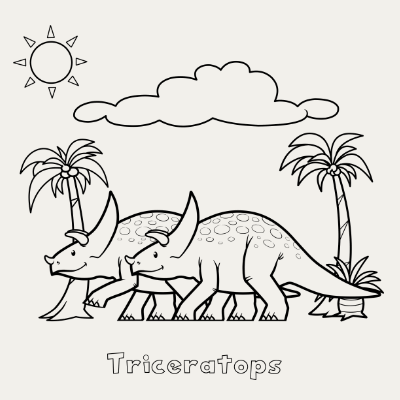 Here come the Triceratops Twins - and don't get in their way!

How many different colors do you think Triceratops should have!
They may have been able to change colors like Chameleons!

It's all in the imagination - until you make it so with
the CuteForKids Coloring Activity Book!

That concludes our petting-zoo tour!
We hope you enjoyed the whole thing!

Don't hesitate to get your own CuteForKids Coloring Book full of pictures of animals to color!

Or have a look at our other family-friendly books.