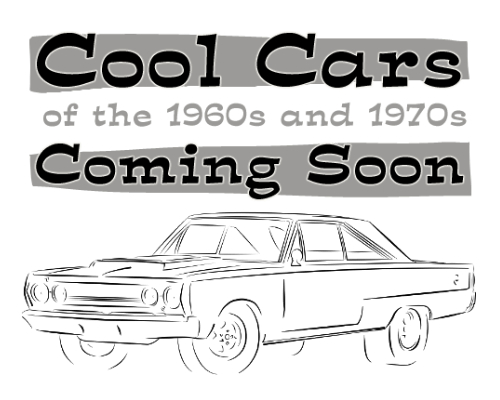 Rev up your crayons and pencils with our one of kind car coloring books!

Drag that black crayon across the page. It's a burnout!

What Radical Color Combos Will You Choose? -Free Printable Download-

What outrageous paint schemes can you come up with for these handsome brutes?

With these Free Printable Downloads, you can explore limitless experiments!  Our car coloring books put you in the Driver's Seat!

We're working on our new car coloring books - full of cool cars and fun automotive enthusiast puzzles!
It won't be ready for sale until July, but you can get a head start with Free Printable Downloads!

Get your Free Samples Now!

Here's another picture from our upcoming cool car coloring books!
This one's for the four-wheelin' demons!

We'll keep posting new pictures until the books are done.
Then we'll post videos of the finished products!

Sometimes folks get a hold of a muscle car and fix it up to go
four-wheeling or rock-climbing!  Crazy!

Electric cars are nothing new!
In the old days, electricity was used to power all sorts of heavy-duty vehicles!

You can get these coloring pages and more in our upcoming
Cool Car Coloring Books!

Grab this Free Printable Download while get the new Cool Cars Coloring Book ready for the starting line!

There is an argument to be made, there is no “first muscle car”.

Contrary to popular stories, the concept was not invented in 1964, but the word “muscle car”did gain popularity
that year.  The actual word “muscle” was used many times in automobile marketing campaigns throughout the years.

In the 1960s, Pontiac wasn't racing professionally anymore.
By 1964, the dilemma was, they had to convince customers their products were still exciting.
Instead of Pontiac using their new slogan “Performance Street Machines” by accident or design, they came across “Muscle Car”!
Pontiac realized their marketing campaign for the 1965 GTO!

When the Highways were new, Dad's car looked like a rocket ship.

Between 1966 and 1972, America was literally car crazy - “Muscle Car Crazy” to be specific.
52 states had multiple cities hosting drag strip entertainment.
A little place like Massachusetts had six cities dragging cars on the regular.

Renting to local gear heads in the off seasons proved a profitable business model for the drag strips as well.
“Van Culture” thrived during the drag racing era.

Drag Racing Events in the 1960s was the hobby for over half the American population.
Fans and crews followed local racers to other cities, battling muscle cars at rival tracks. What a country!

And what a coloring book!

What is a spectator drag?

Also referred to as "Run what ya' Brung", the Spectator Drag events are local racetracks giving audience members a chance to race one lap with their own car against another spectator.

Spectator events, usually held after all scheduled track entertainment, concludes for the night.

Sometimes the track would hold grudged matches with the winners.
Although, often spectator races would run long into the night. The track may not have time for extra events.

Typically, there are no prizes, trophies or consolations. Everyone who participates in the event understands the probability of injury. There is also the real risk of crashing your car. Some guys crash on purpose for a laugh, believe it or not!

Some just like to take home "Braggin' Rights", For a lot of car guys that's a good enough excuse to enter the race.
Also, it's a legal environment. Folks can really push an engine to see what it's got.

Some would answer the question by saying, "watching idiots attempt to race cars". The more optimistic would disagree. Seeing it as entertainment, thrills, unlikely participants, unexpected crashes, extreme mechanical failures and amazing cars people pull out of their garage to compete with.

The attributes of the "spectator drags events" accomplishes an unpredictable electrifying outdoor event, yielding stories that will be repeated over and over at backyard fire pits for generations.

Relive the start line anticipation, roar of the engines, clamor of the crowd, rumble of exhaust, wailing burn outs, explosive crashes, the frenzy of victory and the agony of defeat with our car coloring books.

What is a muscle car?

The term is used to describe a certain era and class of automobile that was sold to the public around the years 1966 to 1972.
A sleek, powerful, affordable daily driver. A car ready for drag racing right out of the show-room.

In the early years, mid-size rear-wheel, two doors with over sized v-8 engines didn't have suspensions to accommodate their own force. Muscle cars had a tendency to appear outrageous - but they were all built for a purpose: to go fast on a straight trajectory.

In the 1970s, the muscle cars were kept alive in the after-market world.
The big auto makers no longer took part, focusing instead on comfort, technology and gas mileage.
Pollution equipment mandates put an end to the show-room-dragster for a while.
The outrageous muscle car ran out of gas as prices everywhere became outrageous.
During the 1980s, the spirit of the muscle car would rise again - and is still with us today - but the new “muscle cars” are expensive, technological performance vehicles.

Bring back the good ol' days with your car coloring books!

The Coolest Car Coloring Books to hit the street is under way!
Get your Free Samples Now!

Bolting aftermarket parts on an engine isn't a new idea. In fact, the automobile companies copped the “sports car” idea from common folk. The public was building impressive breakneck cars prior to performance manufacturers and safety industries.

Farmers were the first “aftermarket” parts makers even before the 1800s.

Country living folk were recovering and re-purposing old world farm equipment, cobbling together or fabricating many parts themselves. Although these guys weren't “sport car” builders, they used ingenuity to maintain equipment along with countless other heavy duty four wheeled contraptions to haul goods into the city.

Farmers would inevitably pass their fabricating knowledge on to city dwellers.
In this regard, automotive flair moved quickly from the country to the city.

City folk took up the country farmers “after market” and turned it into “sports car” building.
Developing fabricated personal transportation became a popular pastime.
For the city folks, there was more tooling and fabricating equipment available for their outrageous mechanical experiments.
Public driving became a lot less safe for driver, passenger, pedestrian and horse.
Cars were destined to go as fast as possible, regardless of whether frames had the structural integrity to accommodate for the torque, power and speed of the homegrown “aftermarket” aficionado.

Some of these sports car connoisseurs got jobs with crime syndicates as get-away drivers. The local police had little choice but to invest in their own speed shops, hiring pursuit drivers to keep up with the competition. Cops and robber car chases were not illegal, venery was competition and all involved parties were eager to take part. Laws were passed after a while, obviously.
The gangsters started mocking up get away scenarios with fellow partisan drivers to practice the craft of handling these outrageously powered machines. These “rundowns” became races as time went on.

Males of all ages and occupations were “aftermarket” auto enthusiast long before the sports car industry got into the game.

Car Coloring Books will be available soon. In the meantime, print, color and lay rubber with free pages.

These cars from yesteryear are so adaptable one can turn them into a modern tech machine.
1960s cars are sought after now every bit as much as they were when they were on the dealers lots. Honestly, maybe more!

The 1950s auto industry was still primitive in machine technology and tooling facilities.
The concept of making one frame then bolting different bodies and power trains on them was the standard for automotive manufacturing. From a concept point of view, the cars were all the same except for trim and creature comforts.

The Chrysler product you bought with a Plymouth brand assigned to it could have been a Cranbrook, Concord, Cambridge, Plaza, Belvedere or a Fury interchangeably.

Oldsmobile had very little distinction between the 88 and the 89 branding.
Chevrolet had a whole catalog of same frame vehicles: 150, 210, Bel Air, Biscayne, Impala including the wagons Handyman, Townsman, Nomad. You can throw in the Beauville van as well.

By the end of the 1950s, veterans were bringing home cars from overseas. It wasn't long before these small, agile, zippy imports got noticed by consumer and industry alike.

The major threat for the big three was they had nothing to compete. Worse was these imports were being modified to go faster and still maintain acceptable gas mileage. A large market of potential buyers were clamoring for these cars by the 1960.

The Auto industry was ill prepared for the onslaught. They simply didn't have manufacturing or tooling to make small cars. Starting from the frame up, they could use nothing from the old manufacturing process in import sized platforms accept bulbs and fasteners.

The imports were great for commuting in and around the more congested city street and college towns. This concept was not lost on the marketers of the big three. Their task was to get customers back into domestic showrooms.

Advertising for the new smaller vehicles developed into a "hip suburban lifestyle" campaign. The big three falsely plugged the concept that sprightly compacts were a new American car idea.
Technically, the big three fell short of their own market campaign, in comparison to compacts the industry introduced big cars.
Teens at the time claimed the American auto industry was a drag, out of touch with what was on the streets.

By now, the used lots had plenty tight handling, vivacious imports. Most of these cars had an added bonus. The previous owner had hopped them up, and of course they were cheaper than a new car.

Another unfortunate truth for the big three was, imports were bought over the domestics because of styling.
Teenagers were starting to populate the cities and collages. They didn't want to drive dad's land yacht and grandpa's dated American car brand just wasn't rebellious enough. Keep in mind, Hollywood turned every 17-year-old in to James Dean.

Sales for the first incarnation of this new car idea were pretty bad considering the entitlement that the big three came to except.
Having no competition until this point caused them to presume all they had to do was show up with a new branded product and everything would turn back to normal. But that didn't happen.

The best-selling original American counteraction to the import craze was the 1960 Chevy's Corvair.

Get ready for the new car coloring books!