Dinosaurs are more popular than ever, but we like to reminisce about the good ol' days.
And that's just what we're going to do right now.

It's hard to make an argument against modern dinosaur toys, from a technical point of view.
Today's toys are more articulated, more animated, and even more scientifically accurate than the simplistic plastic
figures available to kids until the late 1980s.

However, those "simple" toys of yore were just as much fun and provided hours of imaginative playtime.
Among the many toys that appealed particularly to young boys were the elaborate play sets by Marx.
Dozens of themed play sets (and hundreds of variations) were produced and sold between 1950 and 1980.

One look at The Prehistoric Play Set is enough to understand why these sets were so popular. 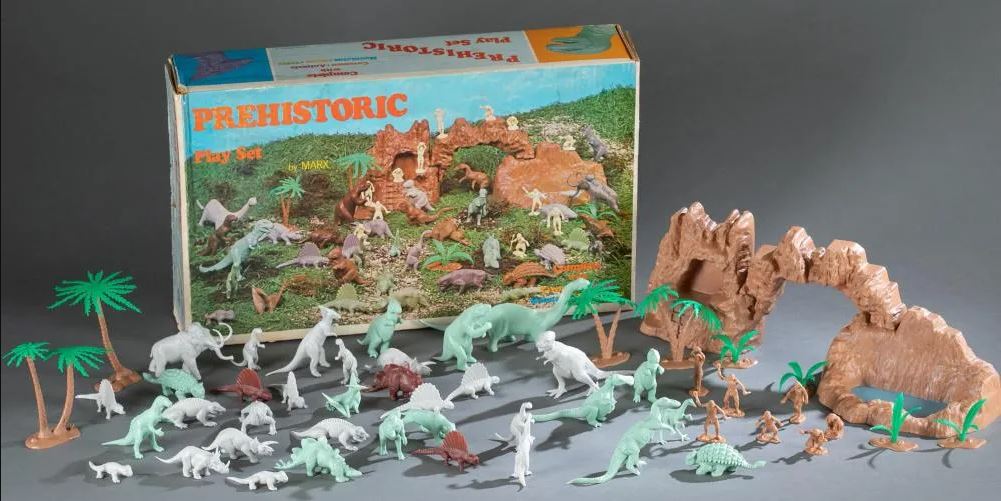 Like all Marx play sets, it featured a host of wonderfully sculpted characters and accessories.
For the young explorer with a penchant for prehistoric adventures, resistance was futile.
This was the ultimate play set.  The ultimate toy.

Sadly, Marx stopped making sets like these around 1979 and the company was dissolved by the mid-80s.
But toy collectors have kept the magic of Marx playsets alive!
Vintage sets like the one pictured above - as well as many others are in circulation today
via nostalgia websites and conventions all over the world.

The land of  the Lost

Land of The Lost  would be their most ambitious production, relying heavily on optical effects and animated models
while promising genuine drama rather than punch-line driven comedy.

Land of The Lost  was a daring but triumphant addition to the Kroft library, an extravagant twist on their tried and true
cartoon-style soap operas about teenagers lost in weird worlds.

All good things come to an end - but it warms our hearts to remember a time
when dinosaurs and strange paranormal possibilities were just another Saturday morning away!

Back in 1977, a strange hybrid made its way onto television screens around the world.
The Last Dinosaur was an American/Japanese co-production, initially meant for theatrical release
but only managed a few screenings after debuting as a "Late Night" TV movie in America.

Most of the film was shot in Japan, but with an American cast.
Rankin Bass (famous for their animated holiday specials) partnered with Toho (famous for their giant monster movies)
and produced a delightfully sloppy science fiction spectacle about humankind's tendency to mess up the environment.

We interrupt tonight's creature feature program
to bring you this surprising announcement:

And now back to the show!

WHEN MAN, WOMAN AND BEAST ROAMED THE EARTH - UNTAMED! THIS IS HOW IT WAS...

Tumak is exiled from his family of untrustworthy brutes and is on the verge of death when he is discovered by Luanna.
She and her people shelter Tumak and make him well again.  But Tumak is a brute by nature and is rejected by all but Luanna.
She thinks he's hot stuff and the two of them go their own way, hopelessly devoted to each other
as dinosaurs and old rivals threaten their love and their lives until the Earth itself plunges the whole prehistoric world into a great volcanic abyss!

The land that time forgot

Edgar Rice Burroughs penned a wild novel called The Land That Time Forgot  in the early 1900s.
In 1974, Amicus Productions (famous for their freaky horror movies) got the nerve to produce dinosaurs
for the big screen - with Burroughs' classic adventure story as their blueprint.

The Land That Time Forgot is a swashbuckling adventure set in the WW I era, whereby the tables are turned
on the captain and crew of a submarine by their prisoners of war.
The prisoners manage to sabotage the sub's navigation, causing it to sail for parts unknown.

Upon discovering his sub has been penetrating the Arctic Region for three days, the captain
surprisingly allies with the prisoners. He respects their victory - and the fact that the war is no longer a priority.

A desperate search for land leads to conversations about old rumors of oasis' beyond the great ice walls.