about Shawn and Brian Gillis

and their coloring book adventure! 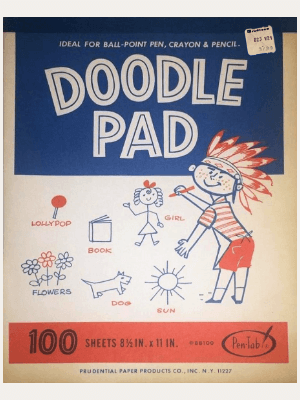 The notorious Doodle Pad was available at department stores everywhere!

If ever there was a marvelous decade to be a youngster, surely the 70s would be in the running for the top spot.

Doodle Pads, crayons, and magic markers were plentiful at all the Gillis dwellings.  Affordable provisions intended to keep two boys occupied.
They worked like a charm.

One of our earliest shared memories is of drawing our parents.
Brian depicted them as big and fat.
He had no understanding of proportions.
Ridiculous entities were all he could muster.

Thoroughly amused by his little brother's drawing skills, Shawn drew his own pictures of 'our parents' - with ever more exaggeration.

We discovered a new game, a competition for who could be more outrageous.
We laughed so hard our mom and aunt came into the room to see what the fuss was about.

“Is that what you really think of us?”Mom asked.
She and her sister-in-law got a kick out of the whole affair.
It was their reaction that turned a fun game into a lifelong venture of entertaining others through illustration!

Mom kept those drawings for some years. Aunty held on to them for a while.
Unfortunately, they finally disappeared forever.

The point is: marker pens and Doodle Pads were integral to our bonding moments.

Looking back, Brian says, “In the beginning, Shawn warned me about how marker pens ruin Doodle Pads if not used correctly.  I would let my markers bleed through all the pages while Shawn drew dinosaurs and monsters we saw on television.”

“My big brother, the whimsical wizard, knew all about magic markers and how to conjure up images with them!” 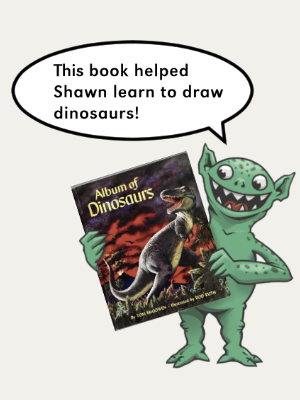 Album of Dinosaurs by Tom McGowen, Illustrated by Rod Ruth

Aunty brought us to the library often.
There, Shawn discovered the Terrible Lizards in all their illustrated glory.

Shawn reminisces, “Dinosaur art was more imaginative when I was a kid.
Illustrators were not compelled to make dinosaurs scientifically accurate.  It was a lot more fun in my opinion.  I copied  that stuff all the time and taught myself how to draw.”

Brian marveled at Shawn's ability to read aloud to him! 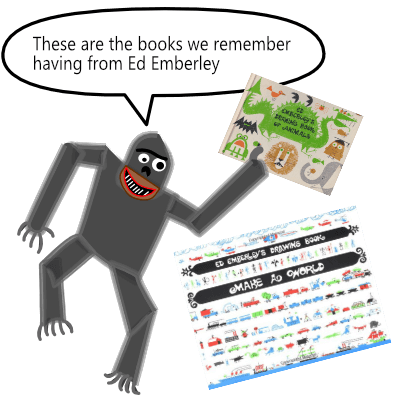 Ed Emberley believes everyone can learn to draw.
By following his simple shape designs and step-by-step formula, one can make things that look just like the illustrations in his lessons.

Brian recalls, "For a youngen' like me who could barely hold a pencil properly, this was exciting and inspiring."

“Shawn was way ahead of me. Not only with illustration, but artistic expression in general.  He was born connected to that invisible force we call creativity.  He often told me 'Simple shapes are drawings.'
Ed Emberley's books proved he was right.”

Around 1980, we started vandalizing our parents' magazines, scrawling sardonic captions on the photos in the spirit of our favorite old game of topping one another's sense of humor.

That was short-lived because around this time we discovered Mad, Cracked and Crazy Magazines.
These were popular variety style comic books full of parody, spoofs, satire and farcical comedy.

Crazy Magazine was in its stride at this time and made a huge impression on us.

But we were already inspired by:

...and all the wacky 60s re-runs, movies and cartoons that dominated television.

1970s television was already fueling our drawing sessions when Crazy Magazine convinced us we should 'publish' our own comic magazines.

Doodle Pads became Gillis Magazines when we got done with them.
We didn't call 'em Gillis Magazines.  Each would have its own weird title heralding phony advertisements, ironic stories, odd anecdotes, straight up buffoonery, and lots of gratuitous violence.

We were still playing that traditional game of ours - but in separate rooms - so that the other could not steal ideas or get a glimpse before the unveiling.

Imagine waiting on this week's fun variety magazine, complete with 'cover page' and table of contents; not from the local convenience store, but from your crazy and hilarious brother.
Not to mention your eagerness to present your  ridiculous magazine to him!
Good times.

We bought a movie camera with a 'single frame advance' function, which means we could make animated cartoons.
Or so we thought.
Shooting on 8 Millimeter film in the pre-digital age was no simple task, never mind trying to produce an animated cartoon show out of your bedroom (or your parent's dining room, as was often the case). The results were less than spectacular, but we had fun experimenting for years!

Computers changed the game since then.
We haven't given up on animation, we can assure you.

Return of the new Product!

As the 1990s rolled in (and we rolled into our early 20s), we had been working in the printing industry for about 6 years.
It was only a matter of time before we decided to publish a real comic magazine.

The story of the absolutely ridiculous Magazine

One day, Shawn built a light table with some basic lumber and a big sheet of plexiglass.
Brian didn't fully realize the significance of this.
Shawn explained, “Real illustrators need light tables. It's time we get serious.”

We got very serious, drawing and re-drawing, lettering and re-lettering, until we had a genuine prototype comic book ready for production.

We called it The Absolutely Ridiculous Magazine and had 600 copies printed.

While digital illustration was on the rise at this time, the personal computer was not yet a household appliance.
That means we had to keep it old-school.
We were proud of our bachelor-pad-apartment-turned-art-studio; stacks of paper and art supplies (including our rickety light table).

Our friends thought we were nuts.

When we showed off 12 cases of Absolutely Ridiculous Magazines, they still thought we were nuts.

We have many tales to tell about the successes and missteps we experienced, but the bottom line is:
We got the books printed, sold a lot of them and moved on to other things.
We spent the next 7 or 8 years focusing on music, girlfriends and trying to find decent jobs in a floundering economy.

Many more strange things happened.
The computer revolution, for example.

Yes, many things happened.
We were producing local access television shows in 2005 when we got rid of all our material possessions and headed off to Los Angeles with not but back-packs, a handi-cam and a laptop.

Just before leaving, we made My Favorite Game Show in our empty apartment - just to say we produced something out of absolutely nothing but markers, paper, scissors, and tape.

We called everything we did ZILLIS-MEDIA - and we did many more things.
Lots of things we're proud of, but that are not related to making fun coloring books.

Today, we make fun coloring books - because it's fun!
We hope you enjoy customizing and coloring our fun drawings as much as we enjoy providing them to you!